The Battle of Biazza Ridge III

Yup, this is the third go on the same table with roughly the same forces.  So here's the scoop: my boys (ages 12 and 7) played the game twice using "One Hour Skirmish Wargames,' with slightly different force composition and arrival/placement.  Then I hatched a plan to play the game again, but using different rules (more on that at the bottom), and a very interesting occurrence happened this past Saturday evening: we had company over to play a wargame!

My wife and daughter were out at a friend's birthday party, so the boys and I were all alone at home.  My older boy's baseball team had the weekend off, and my younger boy's team had played earlier (and won), so we were just home chilling out (I was painting), when I got a call from a buddy of mine, asking if my boys wanted to come over and play with his boys.  I coach my little boy's baseball team, and this gentleman is not only one of my assistant coaches, but his little boy plays on the team, and he and I also coached our older boys together back when they played on the same team.  I told my buddy/assistant coach I didn't feel much like going anywhere, but if his boys wanted to play a wargame I'd gladly entertain them (they had previously seen my toys but never played with them).  So, it was pretty doggone cool to have four boys I coached in baseball up in the War Room, playing a game.  Happily, all indications are that they had a great time, and the little ones beat the big ones! ;) 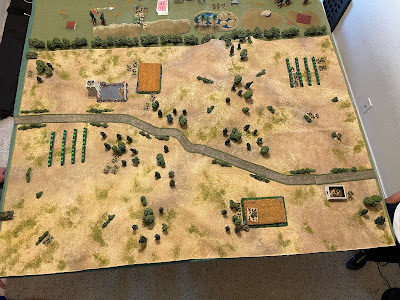 Here we go again! North is up, the ridge runs southwest to northeast (bottom center left to top center right), and the terrain is broken by some cultivated fields, some orchards, scattered trees and bushes, while being bisected by a dirt road running through the saddle between the North Spur and South Spur of Biazza Ridge.  The only hard cover on the table is the bombed-out church at left top and the house at bottom right.

The Germans have their CO, three rifle platoons (two with three squads and one with two), an FO, an 80mm mortar team, an MG-42 HMG team, and two Tiger Is.

Spotting is automatic for everyone EXCEPT the Tigers, who must test to spot infantry if they do not have a friendly infantry stand in base contact.

So the game kicked off, and the 'normal' pre-battle maneuver kicked off.  Both sides were quick to push their forces forward, but were hesitant to actually jump on up and into contact, so the first two turns were nothing but each side pushing menacingly up to the South Spur but staying out of sight below the crest, while the Americans maneuvered aggressively on the North Spur, though still staying out of sight, while the Germans dragged their feet a bit, trying to allow Tiger 501 to catch up, though they became impatient and did neither (maneuver aggressively or allow the tank to catch up).  The 3rd turn saw the Americans push their Forward Observer up atop the South Spur (as they had in the first two fights), and once that occurred the Germans decided it was go time. 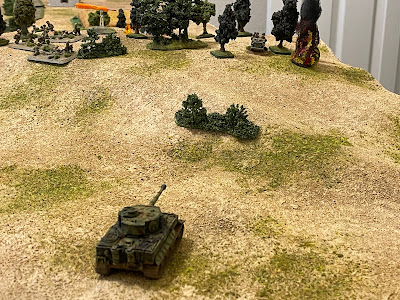 Action on the South Spur: the German 3rd Platoon pushes up onto the crest, where small arms fire breaks out between them and the American 3rd Platoon (top left), as Tiger 502 (bottom center, with Tiger 501 off camera to far left, closing in on the North Spur) takes a shot at the US FO but misses (top center right). 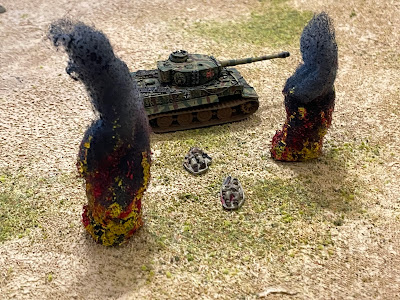 And retribution is swift as the US artillery immediately pounds the Germans, knocking out their MG-42 team!
The older boys were the Germans (again), and my older by kind of listened to me about not needing to have your escorting infantry out in the open; the tanks have to start on the German baseline, and we talked about having the infantry start in cover.  The older boys started the infantry platoons in cover, with the intention of having them sit tight until the tanks caught up, but they got excited and pushed the infantry forward before the tanks caught up, so they decided to use the MG-42 team to escort Tiger 502 (so it would have an easier time spotting the US FO), but that didn't work out very well... 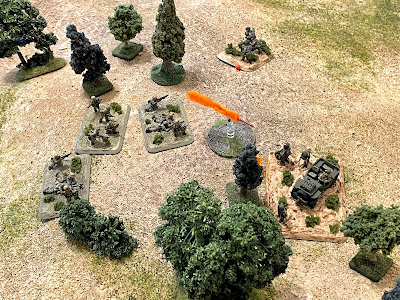 The firefight atop the South Spur heats up, with Colonel Gavin (bottom right, below a 3rd Platoon squad that is suppressed) taking fire!  The Germans attempted to close with the Americans, who used supporting fires very effectively to stop the German advance, though some short rounds suppressed an American rifle squad and forced them to fall back in panic!
Having said that, what really stymied the Germans on the South Spur (aside from being unable to get Tiger 502 into the fight), was being suppressed and having some really, really terrible dice rolls for rallying, which saw one of their rifle squads break and the other two panic and fall back down the hill to shelter in the woods, not getting back into fighting shape until the fight was decided... 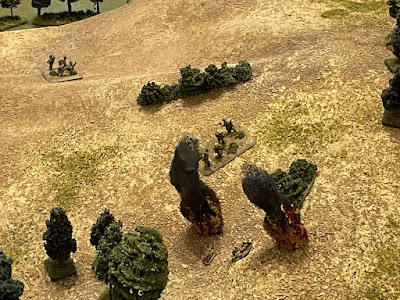 Having decimated the Germans on the South Spur, the Americans shift fire onto the slopes of the North Spur, knocking out one of the German 2nd Platoon's squads (with a 1st Platoon squad visible at top left). 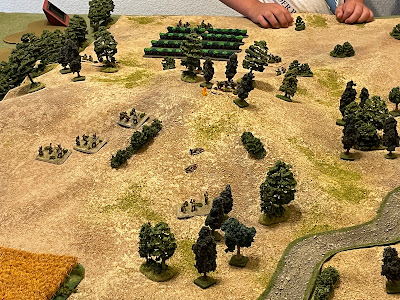 But the Germans are undaunted, continuing their push up the North Spur, where you can see American riflemen amongst the trees atop the ridge.

Without their tank, I might add.  Tiger 501 is off camera to bottom left, struggling to catch up and unable to spot the American paratroopers hidden in the trees atop the North Spur. 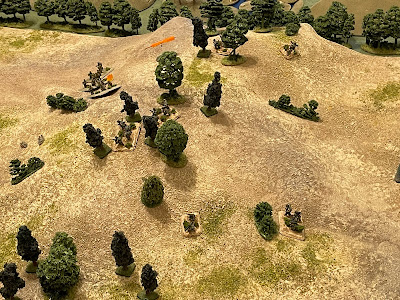 The Americans continue to push troops up the North Spur as well, opening fire on the German 1st Platoon (left top), which they've caught in the open, but their small arms fire is ineffective... 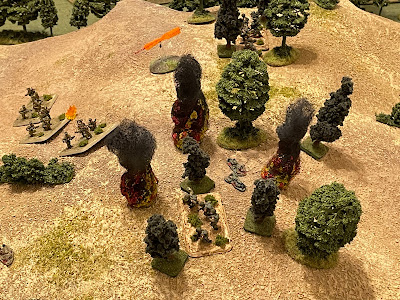 But the Germans use their 80mm mortar to pound the US 2nd Platoon positions on the North Spur (bottom center), knocking out a rifle squad. 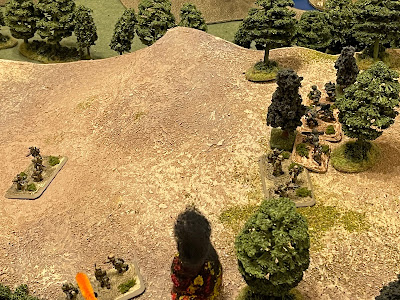 And the Germans make their play: chargin into close combat against the US 1st Platoon position (right)!!! 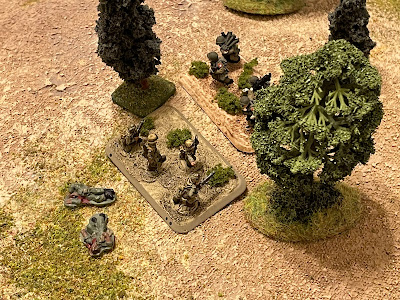 Knocking out an American squad! 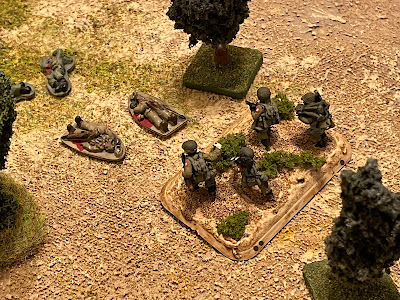 Before being defeated by the next other American squad! 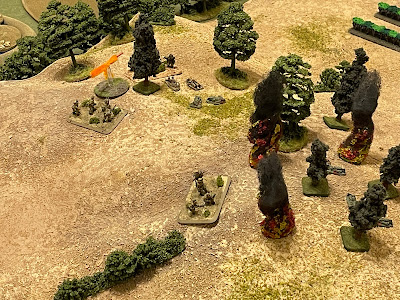 Although the American victory is short lived as the Germans push another rifle squad up (left)... 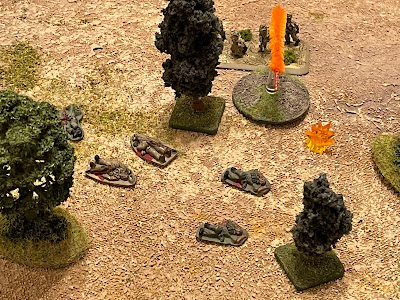 Which opens fire at point-blank range, knocking out the other US 1st Platoon squad! 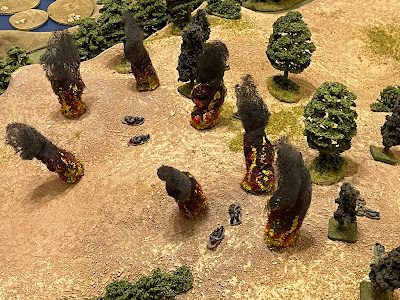 But then the Americans rain down hellfire upon the encroaching German infantry, using both pack howitzers and their 60mm mortar team to fire the FPF on the North Spur, literally wrecking the German 1st and 2nd rifle platoons!!! 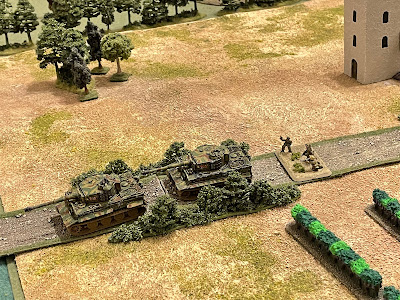 Their supporting rifle company in shambles, the German tanks turn tail and run, chased by the German CO, exhorting them to stay!

A tremendous amount of fun, and just really cool to have a game going with four youngsters.  The younger boys really only made one error (putting their CO and FO together, the only two units that can spot for the pack howitzers and mortar team), while the older boys did plenty of scheming, but it had some flaws, and they didn't stick with their plan anyway.  The big issue was that they panicked when their assault on the South Spur got stonewalled, and simply threw their 1st and 2nd Platoons up the North Spur, without leveraging supporting fires or their massive Tiger tanks.

The rules were home-brew and dead simple, though the game still took about two hours and fifteen minutes, but hey, four boys playing rules for the first time is a whole new take on Clausewitzian friction ;)  I went with a Bolt Action-style of activation: count up units and you get that many cards, each unit can act once per turn (move and shoot, shoot and move, sprint, or shoot), shuffle the German and American cards into a deck and start drawing cards, acting with one unit at a time.  Rifle Squads got one firing dice, MG and 60mm mortar got 2, pack howitzers and 80mm mortar got 3, Tiger got 4, hit on 4+ in the open, 5+ in light cover, 6 in hard cover, then save on 5+ in the open, 4+ in light cover, 3+ in hard cover.  If a unit was hit but saved it was suppressed, if it didn't save it was removed, and we rolled to rally all units at the end of each turn, needing a 5+ in the open, 4+ in cover, falling back 10" and staying suppressed if they failed.  The tanks had to test to spot enemy infantry if they didn't have a friendly infantry unit in base contact, with the test being the same as the 'to hit' test.

I thought the rules worked pretty well, and the game was lots of fun.  I do wonder if small arms fire is a bit underrated and indirect fire is a bit overrated (or maybe the Americans just have too much, with two pack howitzers and a 60mm mortar team).  I'm thinking to play another game on this table, but this time it's an American counterattack to re-take Biazza Ridge (yes, the Americans won this time, but don't forget they lost the first two!), using these new rules.  Stay tuned! 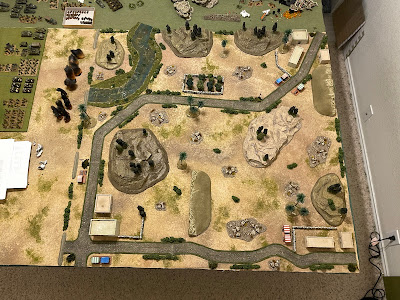 Just Jack
Former Marine, now retired from DoD, doing my best to put on a show; are you not entertained!!??